At the end of the season Rugby Youth Badminton Squad waved goodbye to their head coach.  Terry Gooding, who has been coaching the young talent of Rugby for more than 30 years, retired at the end of March.

As Head Coach, Terry has tirelessly given up his Saturday mornings to help the club’s young players.   Senior coach John Richards said, “Terry’s knowledge of, and enthusiasm for badminton has helped hundreds of youngsters develop their ability and passion for badminton.” Some of those players have gone on to represent Warwickshire County and England.  Terry’s dedication has also inspired the next generation of young coaches as he leaves behind not just one thriving junior badminton club in Rugby, but three.  During his tenure the club secured a seven year winning streak at the Warwickshire Junior team tournament.

Terry’s impact as a coach has not 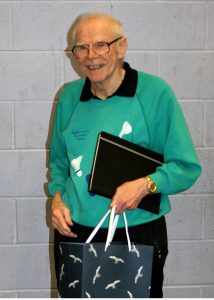 been limited to those in Rugby; as a county badminton coach his love of the game has been passed on to an even wider group of youngsters.  His involvement at county level saw him travel across Warwickshire to find new youngsters with potential and, along with his wife Yvonne, organise countless tournaments and manage a number of junior teams. Terry, who retired from his county level commitments at the end of last season, has become well known and respected throughout Warwickshire, particularly for the support and encouragement he gives other coaches.

To celebrate and recognise his many achievements Terry was presented with gifts, including tickets to the All England Badminton Finals and a memory book with messages from the coaches, parents and children he has coached over the years. John Richards concluded, “Terry will be most remembered for his kindness, patience and encouragement when helping youngsters develop, whatever level they play at.”