Until he retired in 2018 Terry Gooding was head coach at Rugby Youth Badminton Squad.  During the many years that Terry led the coaching in Rugby he also organised, coached and managed the Warwickshire junior county squads.   In particular, Terry, with his wife Yvonne, devoted many hours seeking out and developing young talent from across the county, some of whom went on to represent Warwickshire and England.

Now their commitment and contribution to the success of junior badminton has been recognised by the national governing body, Badminton England.    On Saturday 8th December the President of Badminton England, Diana Troke, came to Warwick and presented Terry with an award.   Diana paid tribute to them both ” In Warwickshire this gentleman and his wife have made a strong foundation so that all these children can play badminton”,  “They are a great example to our sport.”

His award states “Terry Gooding has been awarded  The English Badminton Award for long standing exceptional service to Badminton in England.”   Only six people, from across England, were presented with this award in the 2017/18 season, highlighting just how much Terry’s contribution is recognised. 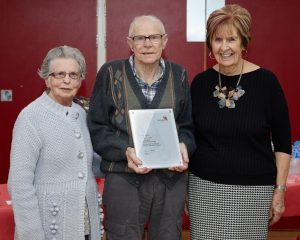