Rugby’s youth squad rounded off the season with victory in a tournament for non-county players organised by the Racqueteers Club in Coventry. Rugby competed with Racqueteers and Jubilee (from Coventry) and Alveston (Stratford) in three matches of ten games.

It was a fine all-round team performance. Murray Irving was unbeatable in both singles and doubles. Lewis Cobb won five of his six games, not quite overcoming the strongest singles opponent despite playing some wonderful, disguised drop shots. For the girls, Becky Francis led the line with some fine shots and good movement around the court, losing only one of her six games. She and Priya Lall played well in the doubles, winning two games and coming close in the third. Rob Fletcher and Ben Kimberley played well and won all their doubles games. They joined Rajani Lall and Sravya Datla for some hard fought games in the mixed, winning three games and coming close in the fourth (24-22). Overall the team won 24 of their 30 games.

The under-13’s also played well and fought hard for every point. They drew two matches and only lost the last one 4-6. In the drawn matches a handful of points separated the teams, just enough to deny the team a medal. Ashley Bodycote and James Fletcher came up against strong opposition in the boys singles and doubles. Raveena Rana was the perfect partner winning all six of her doubles and mixed games with Hannah Allroggen, Sai Datla and Ollie Fricker. Jess Masters and Molly Hillyard played magnificently to win all their doubles games, making five wins each including singles.

Trophies and medals were presented by former English number one, Jill Pittard. She represented England 14 times including two world championships.

Under-13 Team with Jill Pittar 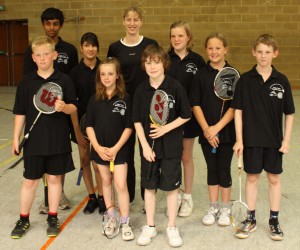 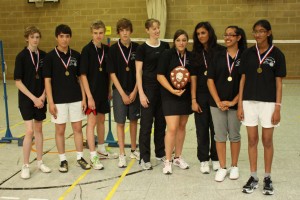