The 5th Warwickshire Junior Inter-Club Tournament was held at the Rugby College Sports Centre on Sunday, 29th April, 2012, attended by teams from Rugby, Coventry and Stratford. The event was organised by the Rugby Youth Badminton Squad and sponsored by the Rugby District Badminton Association.

Prizes for “player of the tournament”, as voted by the players, were awarded as follows. This prize recognised those who played with skill, but were also enthusiastic, tried hard & played fair.

The two Rugby teams rounded off a successful 2011/12 season, retaining the Under-17 trophy and with bronze medals for the under-13 group. Everyone played well, fighting for every point. The Rugby teams comprised 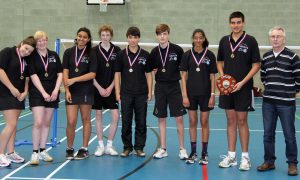 Many thanks to everyone who helped on the day (too numerous to mention) but especially to the team managers who did all the hard work keeping all the matches running on time. Thanks also to all the clubs who took part for their support.

Thanks also to the Rugby District Badminton Association for their financial support and to their chairman, Mark Hope, who turned out twice to present trophies and medals to each age group.