U13 shield: Alveston Juniors
Runners-up: Rugby Youth Badminton Squad
The two Rugby teams rounded off a successful 2012/13 season, retaining the Under-17 trophy for the third year in succession and with silver medals for the under-13 group. 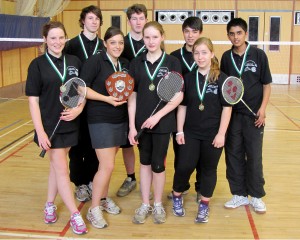 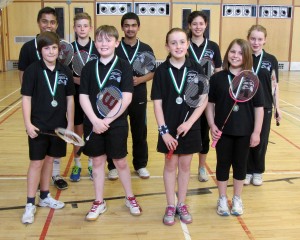 The under-17 team gave a fine all-round performance, winning 27 games for the loss of only 3, and dropping only 16 points overall. Murray Irving, Kishan Mistry, Becky Francis and Catie Taylor won some hard fought singles. They were joined for the doubles games by James Sanders and Emily Inns, plus Woody and Eva Woodbridge. These four went on to win all six mixed doubles games. A tremendous team effort ensuring that the Under-17 trophy returned to Rugby for the third year running.

The under-13’s also played well and fought hard for every point. The team won two matches 7-3 and 10-0, but were unable to topple the team from Stratford who went on to win gold medals. Spondan Biswas, Lewis Hudson, Ellie Taylor and Anna Farren had great success in the singles games, winning nine of the twelve games and dropping only 13 points overall. Anna and Lewis set the pace, winning all of their games. In doubles everyone won at least two games, Luke Francis and Anna Piercy in the mixed doubles, Lina El-Daly and Anna Piercy in girls doubles, Daniel Watkin and Lewis in boys doubles and Parth Joshi in boys and mixed doubles. The strongest performance was from Anna Farren and Ellie Taylor, who won all three of their doubles games. Another great team performance improving on the bronze medals won last season.

Trophies and medals were presented by Terry Gooding from the Warwickshire Schools Badminton Association.