The 7th Warwickshire Junior Inter-Club Tournament was held at the AT7 Sports Centre in Coventry, on Sunday 29th June, 2014. The following clubs entered teams.

Detailed results will appear here shortly (Click here for results, Under-13 Results or Under-17 Results)

The two Rugby teams rounded off a successful 2013/14 season, retaining the Under-17 trophy for the 4th year in succession and with silver medals for the under-13 group. The Rugby teams comprised; 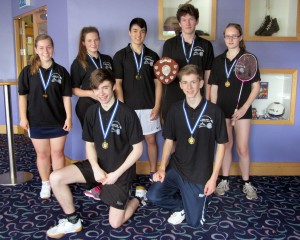 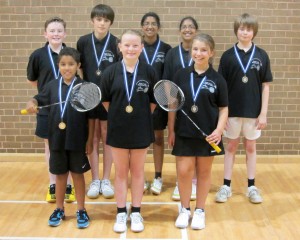 The under-17 team were well disciplined, winning 18 games for the loss of only 2, and dropping only 10 points overall. A great team effort with a contribution from everyone. Murray Irving, Daniel Nutt, Jess Masters and Catie Taylor won all their singles. They were joined for the doubles games by Matthew Gunton-Jones, Emily Inns, Woody and Eva Woodbridge. A stunning performance ensuring that the Under-17 trophy returned to Rugby for the fourth year running.

The under-13 team was quite inexperienced this year but they all supported each other and played very well, finishing in an admirable second place. In a very tight contest the team beat third placed Jubilee Juniors with a better points tally, and came close to beating Alveston Juniors, the eventual winners from Stratford. Daniel Watkin, Matthew Sirman, Ellie Taylor and Alex Farren were very successful in the singles games, winning nine of the twelve games and dropping only 23 points overall. In the crucial match against Jubilee, to secure silver medal position, James Loraine and Vinaya Boppudi won their mixed doubles to tie the match on games, then Dylan Mistry and Vidhya Boppudi scored a vital 18 points to help Rugby win the match on points. A great team performance with outstanding contributions from Ellie and Alex winning all their games.