This year the annual Warwickshire Junior Team Tournament was held at Tile Hill Wood School in Coventry, attended by teams from Rugby and Coventry.

The two Rugby teams swept the board winning both the Under-13 and Under-17 trophies. Both teams served up a number of enthralling games, but it was the great team effort that ensured that everyone came away with gold medals.

The under-17 team won 36 games out of 45. Mark Loraine, Ashley Bodycote, Jess Masters and Catie Taylor won all their singles. They were joined for some hard won doubles games by Luke Francis, Charlie Bearpark, Ellie Taylor, Anna Piercy and Lina El-Daly. A stunning performance ensuring that the Under-17 trophy returned to Rugby for the fifth year running.

The under-13 team were pushed all the way, winning 27 games out of 45. Isaac Porter, Daniel Burgess, Rhiya Srivastav and Beth Wordley won 6 out of their 8 singles. James Loraine, Dylan Mistry, Finlay Miles, Becky Dean, Isobel Porter and Jess Naylor joined them to win 5 out of 8 doubles and 2 out of 4 mixed doubles. Against strong opposition it was pleasing to see players fight back after each setback, winning points that ultimately edged the team into first place. 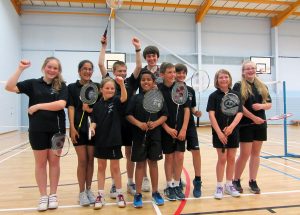 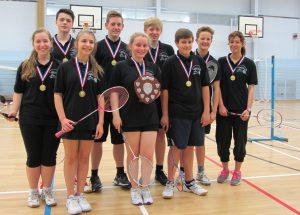