The 9th Warwickshire Junior Inter-Club Tournament was hosted by Rugby Youth Badminton Squad at Rugby School Sports Centre, on Sunday 19th June, 2016.  Two separate titles were contested through a series of round robin matches.  For both age groups this included individual boys and girls singles games as well as a number of doubles (boys, girls and mixed) matches.  The competition excluded County players above 11 years of age.

There were some fine individual performances across all clubs, and some keenly fought games.   In the Under-13 tournament the top two teams both won 24 games, and there were only 22 points between the 1st and 3rd teams.      Trophies and medals were presented by Mark Hope, chairman of the Rugby & District Badminton Association.  Click here for detailed results of Under-13 and Under-17 tournaments. 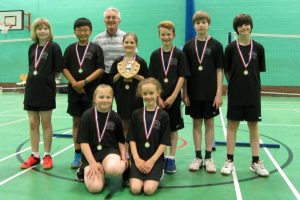 A stunning performance ensured that the Under-17 trophy returned to Rugby for the sixth year running. The under-17 team came out on top winning 21 games out of 27.  Impressive performances were seen from Catie and Ellie Taylor, who won all of their singles games, as well as Luke Francis and Anna Piercy, who won all of their doubles games.  Ashley Bodycote and James Fletcher both won four out of their six games whilst Parth Joshi and Lina El-Daly also claimed wins and helped the team amass a huge 128 points more than their nearest rival.

Building on success the Under-13 squad brought home the title for the second consecutive year.  The team were pushed all the way by Jubilee Juniors, both winning 24 games out of 32.  However, the Rugby team claimed the trophy by winning more matches.  Daniel Burgess, Alistair Sirman, Isobel Porter and Jess Naylor all won seven of their games, losing the eighth by just one point.   Euan Peasland, Michael Yu, Ava Farren and Ruby Slatcher all won games and added valuable points to secure another team victory.