The 10th Warwickshire Junior Inter-Club Tournament was hosted by Racqueteers at the AT7 centre in Coventry, on Sunday 2nd July, 2017.  There were 13 teams from the following clubs.   This year for the first time each club brought two U-14 teams, with the second teams competing in a separate group.  Racqueteers also had two U-18 teams.

Three groups competed in a series of round robin matches.  For each group this included individual boys and girls singles games as well as a number of doubles (boys, girls and mixed) matches.  The competition excluded County players above 11 years of age.  There were some keenly fought games in all groups.   The Under-14 tournament was decided by just 3 points in the final game,  and only two games separated the top two teams in both A and B groups.     Click here to see results in detail.

U14 (B) Group
Winners:  Alveston (B)
Runners-up:  Rugby Youth Badminton Squad (B)

The Rugby second team won two ties and lost to the eventual winners, coming away with well deserved silver medals.  Ava Farren and Fangyi Lin led the way winning 8 of their 9 matches (singles and doubles).  Oscar Currie and Harry Huang built on that success winning 6 of their 9 matches.  Oscar and Harry in boys doubles, and Keira Mistry and Jujanna Deshpande in mixed doubles, held their nerve to win the final two doubles matches of the tournament thus ensuring silver medals for the team.

For the U-14 first team it was gold medals all round, winning the trophy for the third time.   Once again the last match of the tournament was a nail biting affair.   A great cheer went up when Matthew Burgess and Shayni Mistry edged their mixed doubles match, 15-12, to guarantee top spot for the team.  The groundwork had been done earlier with Dylan Mistry, Michael Yu and Matthew winning all of their 15 singles and doubles matches, whilst Jessica Naylor dropped only 1 point in three singles matches, and only 5 points in three doubles matches with Hollie Duckett. A great team effort.

Building on the success of the under-14 teams, the Under-18 squad brought home their trophy for the seventh consecutive year.  A blistering display of power and precision meant the team won 34 out of 36 matches.   Jack Liepa and Anna Piercy were unbeaten in the mixed doubles, whilst Emily Naylor, Catie and Ellie Taylor added 15 wins to the pot.  The girl’s performance was matched by the boys with Lewis Hudson, Matthew Sirman, Alankrit Mata and Jack also winning 15 matches. 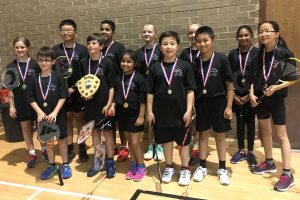 Under-18 team winning trophy for 7th year in succession