The 11th Warwickshire Junior Inter-Club Tournament was hosted by Alveston Junior Club at the Stratford Girls School in Shottery, on Sunday 22nd April, 2018.   There were 8 teams from the following clubs.

Teams in two groups competed in a series of round robin matches.  For each group this included individual boys and girls singles games as well as a number of doubles (boys, girls and mixed) matches.  The competition excluded County players above 11 years of age.  There were some keenly fought games in all groups.   The Under-14 tournament was decided by just 3 points in the final game.   Click here to see U-18 results .

For the U-14 team it was gold medals all round, winning the trophy for the fourth time.     Yifan He and Luigi Bayliss competed in the singles and boys doubles,  Fangyi Lin and Shraya Mistry in the singles and girls doubles, Jujanna Deshpande and Samuel Lau in boys and mixed doubles, and Catriona Sirman and Keira Mistry in girls and mixed doubles.  It was a good all round team performance with everyone supporting each other to secure the medals.  The team won two matches by 7 games to 3, winning 268 points out of a possible 300.   In the deciding match the team won 133 points out of 150, with the mixed doubles pairs winning both their games to secure a 6-4 win.

Not to be outdone by the success of the under-14 team, the Under-18 squad brought home their trophy for the eight consecutive year.  The team won 20 out of 27 games.  Matthew Sirman was unbeaten all afternoon, with Finlay Miles and Ellie Taylor dropping only one game each.   The team faced their stiffest challenge in the last match against a strong team from Alveston (Stratford).    Three-one down after the singles games the team won both doubles games to pull level, with Anna Woodbridge and Beth Wordley holding their nerve to win their game 15-14.   The match was then secured when Dylan Mistry and Ellie Taylor won their mixed doubles game with a powerful performance.   Jonathan Tao won boys and mixed doubles games with partners Dylan and Anna to help the team to victory.   A great team effort.

See the report in the Rugby Advertiser. 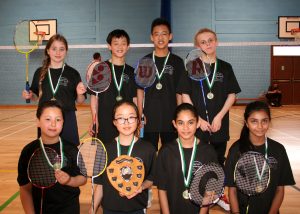 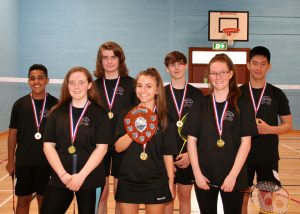